skip to main | skip to sidebar

This is a review of the novel The Defenseless by Amos Keppler.

Today’s bookstores are filled with mediocrity, with the dreary and trite. Potential monetary value or narrow, very narrow cultural considerations more than resembling censorship rule what’s published or not.

Or… at least that was how it used to be. Now, when the age of POD (Print on Demand) and self-publishing has arrived in earnest, the future suddenly looks much more promising.

Three qualities were usually lacking in times past, often because of those reasons of monetary value and considerations mentioned above. The story is mostly missing in works published through traditional means, genuine penmanship and daring, controversial content as well.

If you by a miracle should find one, you won’t find the second and certainly not the third.

The Defenseless has all three.

Like others have pointed out the first chapter reminds me slightly of Metamorphosis by Kafka, but after that all resemblance to anything else vanishes completely. It becomes a blazing trail of originality, of life and realism jumping from the pages. Reactions from people reading a Keppler novel is usually one of two extremes: either you love it beyond measure or you dislike it intensively. One can understand that. It goes straight at the jugular of modern human life, exposing it for the hollow sham it is.

Ted Cousin, his brother and sister and cousins, and those who would be his friends are all strange birds in the present day human society, alienated from it and from themselves in ways wide like an abyss, desperate for some kind of connection, understanding. But the connection remains out of reach. Understanding eludes them.

As the story progresses the crack, the abyss widens to a horrible degree.

I love it when art tells me something straight up, and still leaves depth and texture, and this novel does. It is first and foremost an engaging story, but goes so much deeper than most stories, on so many levels of complexity. After a couple of chapters where the author has taken you beyond anything you’ve ever known or understood, you feel he can’t take you any further on that beyond passionate and desolate road, but he does, until the absolutely devastating, slamming in the face end. One cannot help being affected by it, pulled into its irresistible maelstrom. I read it in two hectic days and nights, and I sat there sweating afterwards, stunned, a wide range of emotions and questions raging through me.

That’s how I want to feel after having read a novel.
Posted by Lise at 6:47 PM 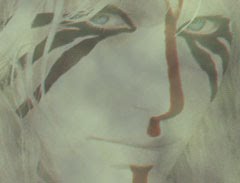 Lise has turned twenty-five and doesn't like it very much. They say it's halfway to fifty. Aside from that Lise has no problems. She has earned a philosophy masters degree at the University of Bergen, and is indeed a very philosophical person, something expressing itself in a number of ways. Lise is Lise, but is otherwise very mysterious, and even though you may feel you recognize her, you would be wrong. She is probably not the mature, sophisticated woman in the office near you.